Al Oerter is often used as an example of Olympic excellence. Not only did he win gold in the discus throw in four consecutive Olympics, but he was also an artist who focused on the true Olympic ideal. “Oerter’s Passion: Melding Art & Sports” in the Spiritual Herald says:

The Olympic star often said that in the ancient games “the athlete was not only expected to excel physically, but also be well versed in art, poetry, literature and music to make him a complete and well-rounded human being. That was what the Olympic goal was in Greece in those days.”

Here’s some inspiration from the late Al Oerter:

I wrote “How to Help Your Child Get the Most Out of the Olympics,” which included a link to a post with ideas from Randy Pausch about dreaming big and dreaming without fear. We as adults can use those same ideas in our own lives. In “Top 10 Reasons Why You Should Watch the Olympics,” My daughter, Christina (who was a World-level ice dancer), also lists getting inspired as the first reason to watch the Olympics.

Glenn Gaesser, a professor and director of the Healthy Lifestyles Research Center at Arizona State University, used the fact that people are excited after watching the Summer Olympics to create an exercise workout that can be maintained long-term. “The 10-Minute Workout, Times Three” from the New York Times tells about an easily-doable workout of brisk walking for 10 minutes three times a day rather than having people do – and give up on – longer workouts each day. With the Olympics inspiration and a doable workout, people can improve their health and control their weight.

Olympic inspiration really can be used for anything. The Olympics are about striving for excellence and working hard to do your “absolute best.” 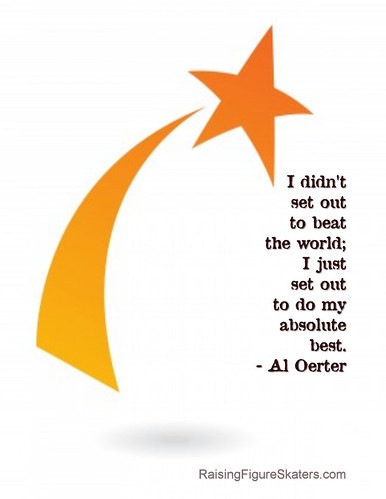 “Set Out to Do My Absolute Best” Word Art Freebie

If you have a new dream, you might want to create a 30-day challenge to make it more likely for any new practice to become a habit. But however you feel drawn to work on your dream, don’t pass this Olympic opportunity to gain some new inspiration.

“I guess people like to hear my stories, but I’d prefer they went out and developed their own story.” Al Oerter

So go ahead and develop your own story … live your own dream.