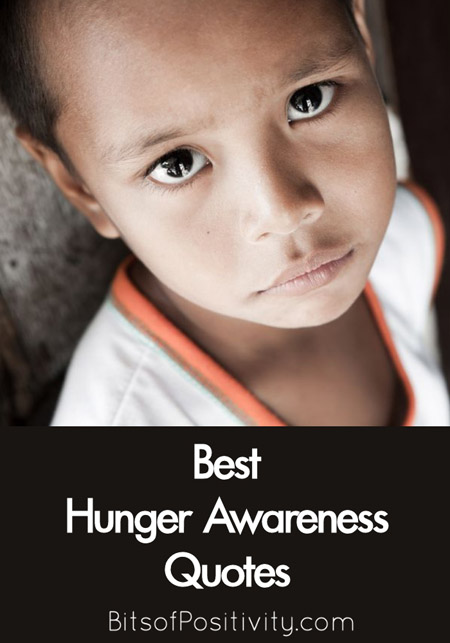 “If you can’t feed a hundred people, then feed just one.” Mother Teresa

“Hunger is not a problem. It is an obscenity. How wonderful it is that nobody need wait a single moment before starting to improve the world.” Anne Frank

“Close to a billion people – one-eighth of the world’s population – still live in hunger. Each year 2 million children die through malnutrition. This is happening at a time when doctors in Britain are warning of the spread of obesity. We are eating too much while others starve.” Jonathan Sacks

“Recent research shows that many children who do not have enough to eat wind up with diminished capacity to understand and learn. Children don’t have to be starving for this to happen. Even mild undernutrition – the kind most common among poor people in America – can do it.” Carl Sagan

“One in four kids in the U.S. faces hunger.” Jeff Bridges

“35 million people in the U.S. are hungry or don’t know where their next meal is coming from, and 13 million of them are children. If another country were doing this to our children, we’d be at war.” Jeff Bridges

“One of the greatest feelings in the world is knowing that we as individuals can make a difference. Ending hunger in America is a goal that is literally within our grasp.” Jeff Bridges

“In this country that grows more food than any other nation on this earth, it is unthinkable that any child should go hungry.” Sela Ward

“If you want to eliminate hunger, everybody has to be involved.” Bono

“There are genuinely sufficient resources in the world to ensure that no one, nowhere, at no time, should go hungry.” Ed Asner

“There is no finer investment for any community than putting milk into babies.” Sir Winston Churchill

“The war against hunger is truly mankind’s war of liberation.” John F. Kennedy

“When people were hungry, Jesus didn’t say, “Now is that political, or social?” He said, “I feed you.” Because the good news to a hungry person is bread.” Desmond Tutu

“When you share your last crust of bread with a beggar, you mustn’t behave as if you were throwing a bone to a dog. You must give humbly, and thank him for allowing you to have a part in his hunger.” Giovanni Guareschi

“For now I ask no more Than the justice of eating.” Pablo Neruda, Chilean Poet, Nobel Prize Winner

“Hunger makes a thief of any man.”  Pearl S. Buck

“A hungry man is not a free man.” Adlai E. Stevenson

“Most of our citizenry believes that hunger only affects people who are lazy or people who are just looking for a handout, people who don’t want to work, but, sadly, that is not true. Over one-third of our hungry people are innocent children who are members of households that simply cannot provide enough food or proper nutrition. And to think of the elderly suffering from malnutrition is just too hard for most of us. Unlike Third World nations, in our country the problem is not having too little – it is about not caring enough! Write your elected representatives and promote support for the hungry.” Erin Brokovich

“My motto in life is ‘If you think it, you can do it’ and if we all apply that thought we can end hunger the world over.” Dionne Warwick

“I hope someday we will be able to proclaim that we have banished hunger in the United States, and that we’ve been able to bring nutrition and health to the whole world.” George McGovern

“Working at the Food Bank with my kids is an eye-opener. The face of hunger isn’t the bum on the street drinking Sterno; it’s the working poor. They don’t look any different, they don’t behave any differently, they’re not really any less educated. They are incredibly less privileged, and that’s it.” Mario Batali

“I have the audacity to believe that people everywhere can have three meals a day for their bodies, education and culture for the minds and dignity, equality and freedom for their spirits.” Martin Luther King, Jr.

“Find out how much God has given you and from it take what you need; the remainder is needed by others.” Saint Augustine “We Can Conquer Childhood Hunger” Word Art Freebie (without watermark)

You’ll find more information about Hunger Action Month and No Kid Hungry in my post on “Fighting Hunger through Social Media.” You’ll also find lots of ways families can help fight hunger in the Moms Fighting Hunger Blog Hop at the end of that post.

Photo Credit: Photo at the top of this post by Sascha Burkard.