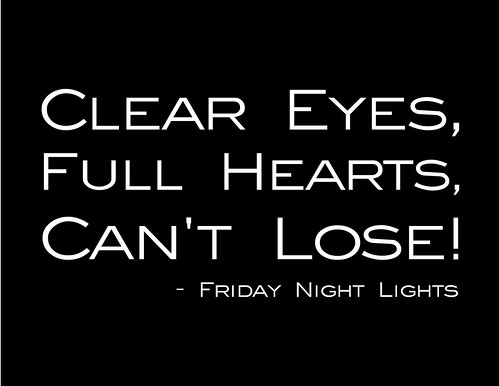 My family actually didn’t watch network television except for figure-skating competitions and the Super Bowl. Instead, we watched movies on DVD (video when our kids were little). Now that we’re empty nesters, my husband and I love to order critically-acclaimed series through Netflix.

The Friday Night Lights TV series is based on a bestselling book and movie of the same name. Set in the fictional town of Dillon in West Texas, the show has a lot to say both about the importance of family and about the sacrifices and responsibility required to follow your dreams.

If you love American football or just enjoy sports movies in general, you’ll probably love Friday Night Lights. For teenagers and older, there are lots of great character lessons and heart-warming family situations to be found in the 5-season series – a series that even has a satisfying ending.

For teenagers, I recommend using the series as a basis for the discussions that are important for parents to have with teenagers. There are a lot of actions going on in the series that I wouldn’t have wanted my own children to participate in, but I think those actions need to be discussed openly during the teenage years.

Here are a few examples of inspiration and character education from Friday Night Lights:

“Life is so very fragile. We are all vulnerable. And we will all at some point in our lives fall. We will all fall. We must carry this in our hearts. That what we have is special.”

“You can’t beat yourself up because you’re taking chances on things.”

“…what football celebrates is teamwork and character if executed properly, that’s what it celebrates.”

“…there’s a joy to this game, is there not? There’s a passion, there’s a reason why we’re all out here. Other than the fact the pride that it gives us and the respect that it demands we love to play the game so let’s go out there and have fun tonight.”

“There are more important things than football.”

It was recently announced that a movie script based on the Friday Night Lights TV series is almost finished. Yay! 🙂

Are you a Friday Night Lights fan?