I focused on Chrissy’s life after competitive skating last week, so I want to focus on Will’s this week. In addition to having increased self-confidence, Will says figure skating increased his ability to work hard and be self-motivated. Although Will was naturally a hard worker, figure skating played an important role in fully developing his ability to work hard, be self-motivated, and persevere through adversity.

I’m a great believer in luck, and I find the harder I work, the more I have of it.

Successful athletes learn to work hard and develop self-discipline. I remember hearing that Ivy League schools often like figure skaters who have tested through senior because of their ability to work and persevere toward a goal. Out of necessity, student athletes also learn to manage busy schedules. 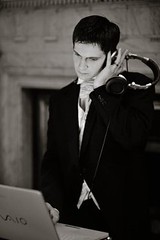 DJ Will. (Photo from 1clickphotography.com)

While training and competing internationally in pairs, Will used his developing time-management skills to simultaneously:

After retiring from competitive skating, Will attended college full-time while working as a coach and DJ. Now Will has his B.A. degree, but he still manages both his DJ business and a busy coaching schedule.

Will’s wife, Chea, is a former competitive skater as well. She uses her ability to be self-motivated to work as both a skating coach and a sports psychology consultant while completing her doctorate in sports psychology.

It isn’t unusual to hear of former competitive skaters who are successful in life. And that isn’t just luck—unless it’s the kind of luck Thomas Jefferson talks about.