Previous article: Be a Good Sports Parent for Your Future Olympian … or Not Future Olympian
Next article: “Education Is the Best Weapon for Peace” Montessori Word Art Freebie
Tweet
Share
Share
Pin

Each Olympic year brings Olympic dreams and inspiration for children around the world. But how many athletes actually win the Olympics? Is it alright for your child to have such dreams even if they don’t come true?

I think the Olympic-dream question could be answered with Randy Pausch’s words: “Dream big. Dream without fear.” Pausch, who was a computer-science professor at Carnegie Mellon University and an award-winning teacher and researcher, would seem an unlikely choice to answer a question about having Olympic dreams.

Yet, Randy Pausch is probably the perfect choice. Before he died from pancreatic cancer in July 2008, Pausch inspired millions of people with the YouTube video of his last lecture as well as The Last Lecture book, which came after and added to the actual lecture given at Carnegie Mellon.

Randy Pausch became a hero to millions for his optimistic fight against terminal cancer, his work promoting pancreatic-cancer research, and his message about living each day and living your dreams. I think Pausch also answered the Olympic-dreams question with this quote:

“Give yourself permission to dream. Fuel your kids’ dreams, too.”

Paush talked a lot about fulfilling his childhood dreams. Although there’s wisdom throughout his lecture and book, I think one of my favorite chapters in the book is the one about a dream he never fulfilled: “I Never Made It to the NFL.”

“. . . even though I did not reach the National Football League, I sometimes think I got more from pursuing that dream, and not accomplishing it, than I did from many of the ones I did accomplish.”

Pausch emphasized the life lessons, skills, and character development he gained from pursuing his dream of making it to the NFL. He talked about what he learned from his youth-league coach. Pausch said:

“Coach Graham worked in a no-coddling zone. Self-esteem? He knew there was really only one way to teach kids how to develop it: You give them something they can’t do, they work hard until they find they can do it, and you just keep repeating the process. . . . he made me realize that if I work hard enough, there will be things I can do tomorrow that I can’t do today.”

Pausch also discussed something necessary in any sport—working on fundamentals. He said:

Probably the following quote about why we as parents encourage our children in sports also answers the question of whether our children actually need to have the best objective result in the end:

“What we really want them [our children] to learn is . . .  teamwork, perseverance, sportsmanship, the value of hard work, an ability to deal with adversity.”

And that may be the best answer. It’s the intangible results and the character development that come from following Olympic dreams that are the most important. Whether or not the dreams come true in the end, the benefits of sincerely pursuing dreams make it all worthwhile. 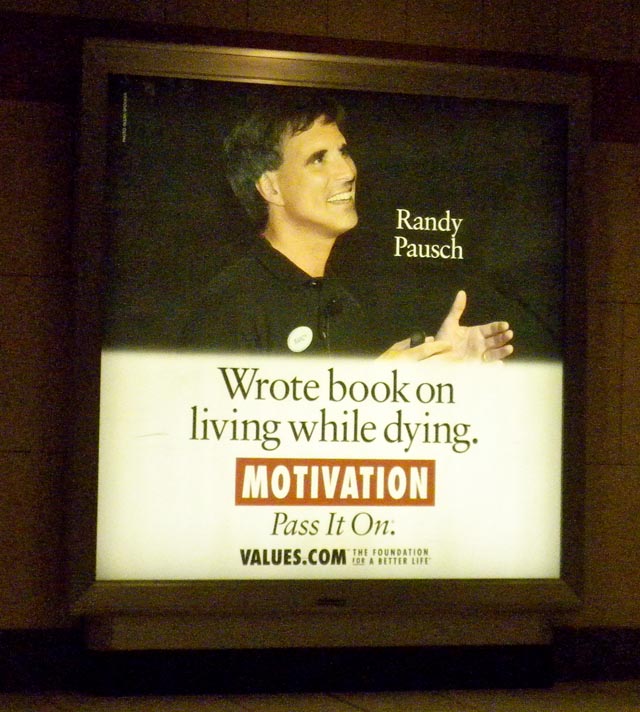 Randy Pausch on a values.com ad

Here’s the famous YouTube video of The Last Lecture: Really Achieving Your Childhood Dreams, presented in September 2007. The YouTube video has had over 20 million views. If you haven’t had the opportunity to see the video, it will be an inspiring hour and 16 minutes of your time.