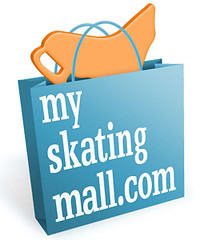 I just got back from wandering around in MySkatingMall.com.  It’s going to be a great place to buy – or sell – skating items.

MySkatingMall.com is a website created by former U.S. World Team Member and current full-time skating coach Ryan Jahnke.  It’s a place where individuals can buy and sell “gently used” skating articles.  There are links to partner stores selling new skating items as well.  With purchases from the partner stores, 5% of each purchase will go to a club or team selected by the shopper.

As a skating mom, I’ve had a lot of experience with purchasing new skating items as well as with managing finances by buying and selling used items.  Buying and selling through MySkatingMall appears to be a simple process.  For skaters, clubs, or teams wanting to sell primarily used skating items (although they may sell some new items as well), there are no fees to list an item during MySkatingMall’s first year.  There will be an annual fee of $1 per item starting March 2011.  MySkatingMall will receive a 10% commission from each sale but will return 5% of that to skating clubs and teams (2.5% to the buyer’s club or team and 2.5% to the seller’s club or team).  What a great way for clubs and teams as well as individuals to make some money from used skating items.

I’m hoping to see a tab at the top of the website for the Store (Gently Used Marketplace).  Right now, there’s a link to it in the website’s blog.  Otherwise, it’s easy to find your way around the mall, and there are a lot of “aisles” in which to get sidetracked, whether you’re checking out the partner stores, individual stores, videos, or FAQs.  There’s a detailed search page in the Gently Used Marketplace to help you find what you need.  MySkatingMall.com just opened, so new additions are being made all the time.

MySkatingMall is going to be a worldwide marketplace, which is especially nice.  The skating community is a bit like a worldwide family anyway, so it’s great when online sites operate worldwide as well.  Since my daughter lives in England, I’m looking forward to learning more about buying and selling internationally through MySkatingMall.

Who is the Man behind MySkatingMall.com?

One of the best things about MySkatingMall is the man behind it all.  Ryan Jahnke is one of the nicest, most genuine, and reliable people you could meet.  I’ve known Ryan for a number of years, ever since Will and Chrissy trained at the World Arena where Ryan also trained and competed.  Ryan made Chrissy feel special by always wishing her a happy shared birthday, even though he’s 12 years older than Chrissy.  I loved watching Ryan compete because of his exquisite artistry and technically perfect jumps.  Even better than watching him compete, though, was knowing he was such a wonderful role model for all the skaters at the World Arena.

Another of Ryan’s many positive qualities is his ability to laugh at himself.  He is also great at encouraging others.  Ryan actually made a YouTube video of Ryan Jahnke’s Greatest Falls: Encouragement for competitive figure skaters.

In the video, Ryan says:

I want you to learn that great things can happen over time. . . . Realize that feelings of disappointment are temporary.  I experienced plenty of them in my 21 years of competing.  You are strong enough to get through them, just as I was.

With Ryan as the person responsible for MySkatingMall.com, the website is certain to be a great and ethical contribution to the sport of figure skating.