I’m a real believer in the Thumper Theory.

“If you can’t say something nice . . . don’t say nothing at all.”
– Thumper from the movie Bambi

I first heard of the Thumper Theory from Allison Scott, mother of Jeremy Abbot, who is a 2-time U.S. men’s figure skating champion. Allison and I live in the same city, and our kids trained at the same rink for a number of years.

In sports where there are too many online rants and criticisms of athletes, I find the Thumper Theory to be a breath of fresh air. But it doesn’t apply just to sports. Many people are calling for more online civility in general – along with more civility in real life.
One year ago today, this was posted at the Reveal Your Character site (Update: Site no longer available):

Worldwide, per second, there are approximately 28 million text messages, 700 status updates to Facebook, 600 tweets on Twitter; 1 million videos watched onto YouTube and 285 million emails. We have the wonderful, yet dangerous ability to spread ideas and information around the world quickly.

Somewhere along the line, we’ve started using those new tools as another way to be disrespectful and uncivil. And not only does it hurt people, it can ruin lives (as evident by the suicides of Phoebe Prince and Tyler Clementi).

Those numbers are much greater today. And that makes it all the more important that we take responsibility to be civil online as well as in person.

It’s a Great Day to Focus on Character

What About Your Kids’ Character?

Keeping Kids Safe: Children, Mobiles and The Internet from O2.

My wish is that adults and kids alike can follow the Thumper Theory both online and in real life.

Here’s a sweet example of the Thumper Theory at work in real life:

Here’s a post with more information about the “Say Something Nice” mission from Improv Everywhere. 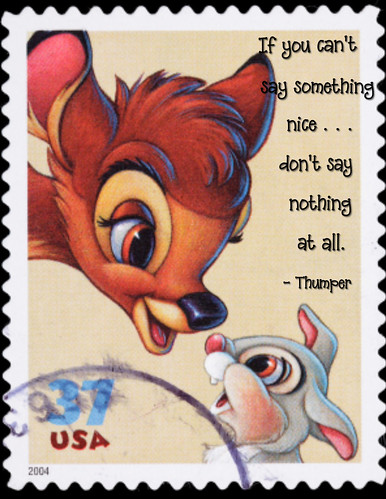 So, let’s all say something nice! 🙂