Awaken the Olympian Within: Stories from America’s Greatest Olympic Motivators
Compiled by John Naber
267 pp  Griffin Publishing Group
Disclosure: This post contains affiliate links (at no cost to you). 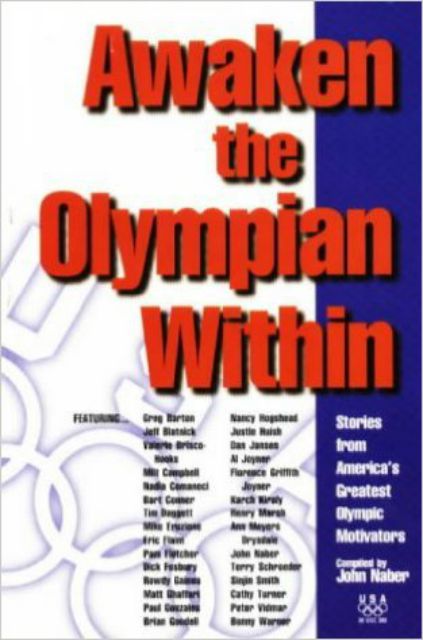 It often seems that successful athletes who have had painful failures have the most wisdom to share. Speed skater Dan Jansen is a good example. Dan Jansen shares his wisdom in one of the 27 inspiring stories from Awaken the Olympian Within: Stories from America’s Greatest Olympic Motivators compiled by John Naber.

Dan Jansen’s advice is in a chapter called “There’s More to Life Than Skating Around in a Circle.” Although Dan Jansen has an Olympic gold medal in speed skating, he is sometimes known best for his painful Olympic path to success. In particular, he is famous for his heartbreaking 1988 Olympics when  his sister died from leukemia before the race in which he was favored to win. Jansen fell in that race and the one after it. It wasn’t until his fourth Olympics in 1994 that Dan Jansen won his gold medal.

Jansen believes in learning from failures. He quotes a Garth Brooks song:

Failure isn’t failure if a lesson from it is learned.

Each athlete in the book approaches his or her story and advice in a different way. Jansen has a section for each topic he discusses.

For example, in “Perspective,” Jansen talks about his first National Championship, when he cried all the way home in the car after coming in second. His father’s advice at the end of the trip became inspiration for the title of the chapter when he said: “Dan, you know there’s more to life than skating around in a circle.”

In the “Goals” section, Jansen talks about his training experience running and jumping up ski hills. His coach, Peter Mueller, helped Jansen keep going and learn to reach goals one step at a time. Mueller’s words were:

Jansen advises people to be aware of their competition but not to dwell on the competition:

Don’t worry about them, don’t try to copy them, don’t even think about beating them. Worrying too much about your competition takes the focus away from making yourself the best you can be.

Dan Jansen emphasizes that you need to take chances to be successful in any field. He uses the saying:

You cannot discover new oceans unless you have the courage to lose sight of the shore.

Jansen used that philosophy to continue to train for the 1000 meter race when many told him to train only for his specialty, the 500 meter race. Although many thought training for both races would weaken his 500-meter race Jansen says:

Over the next two years, I broke my 500-meter world record four times and became the first person ever to skate the distance in fewer than thirty-six seconds.

Jansen quotes the Boy Scout motto: “Be Prepared.” He has a slightly different slant on preparation, though:

Achieving your goals requires being both mentally and physically prepared. It requires a balance in your life—a balance between hard work and recovery time.

Jansen has learned to be true to himself. His successes and failures have given him a balanced perspective on life:

Jansen’s wisdom is only one of 27 stories by athletes with advice that can be applied to any field. One story could be read each day. There’s certainly more than a month’s worth of reflection in the book.